Is it possible to become a Werewolf?

Is it possible to become a Werewolf?

Does the server support players being were animals? (just asking because you can be a vampire)
If you can, I wish that my Human Fighter would be absolutely finished, if got to be a werewolf (would make him the ultimate RP character EVER!)

If there isn't a possibility, then I hope you could make it possible (Capability of transforming between Your main race, a wolf/or the animal you're were-animal in, and then the Were form 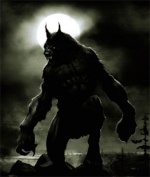 Re: Is it possible to become a Werewolf?

Yes, PCs can become were-wolves and more (many were-forms exist here) - all it takes is

getting bitten by a PC WEREform of 10th level or higher, or being bitten by the 'alpha male' werecreature. After that, your lycanthrope PC will suffer all the classic effects.

Good question. Hope this covers it.

Be well. Game on!
GM_ODA

Re: Is it possible to become a Werewolf?