Rogues can pickpocket for XP, Wizards can study spells, other classes have specific alternate methods of progressing their experience. Clerics is one of the classes which I have found does not have any sort of implementation. Praying at an altar should give some XP similar to rogues with picking pockets... or, even burning some divine favor for raw XP could work. A cleric isn't much of a combat class, so it is difficult to earn levels from killing. Please consider having praying give XP and/or sacrificing divine favor for XP. A Cleric's life is devotion to a deity, not so much adventuring, so praying, and healing for XP would make complete sense.

I might suggest an appropriate RP-based action worth earning experience would be proselytizing... preaching the tenants of a Cleric's chosen deity's portfolio and attempting to convert others to the Cleric's faith. 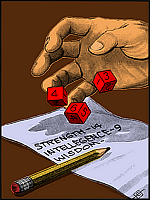 Gawain_VIII wrote:I might suggest an appropriate RP-based action worth earning experience would be proselytizing... preaching the tenants of a Cleric's chosen deity's portfolio and attempting to convert others to the Cleric's faith.

This has been done elsewhere and was suggested previously. In the place I saw it done there was a limit as to how many times you could get xp for a successful convert.

You can get xp in general no matter what class by talking to random npcs.

I'd like to link this specific thread, as I think what it suggests (preaching to PCs/NPCs as a form of xp for clerics and paladins similar to pumping/grifting) would be a good solution for a Cleric "class trick": [You must be registered and logged in to see this link.]


On that thread note, Oda, are you still working on that system mentioned in that thread? I know the team has a lot of things to script, flesh out, and fix, and I appreciate all of your hard work. This would mean a lot to me and others roleplaying divine classes.

Gawain_VIII wrote:I might suggest an appropriate RP-based action worth earning experience would be proselytizing... preaching the tenants of a Cleric's chosen deity's portfolio and attempting to convert others to the Cleric's faith.

Here's a suggestion: Instead of the Rogue's 'Grifting Tool', the Cleric should get a 'Begging Bowl'. Buddhist Monks live by begging, why not in the D&D world? One XP per CP begged from an NPC. 'Someone' would have to script/program the city's NPCs to properly respond (give alms, or throw a brick [XP either way]) . You could always go about in rags singing 'Unclean, unclean' and watch the coppers pour in.

[I hope you don't mind my sense of humor]

For now I'm just RPing that pumping for information is actually my character discussing and preaching about Amaner to others. This form of XP is acceptable and small enough to hold the "Level 20 in 6+ months" rule, and the leveling stands within RP reasons of my character. More than anything, I hate having to do something that is out of place for my character to gain much needed XP to grow him. I do hope a tool will be made specifically for preaching or talking about your deity to NPCs, very similar to the griftpump tool. As a side suggestion, perhaps I'll take Roger's suggestion of a begging bowl seriously, it isn't the same as grifting due to it being honest and having humility.

For the moment though, pumping for information ICly being my character talking about Amaner to others is a workaround I can live with.

This is a work in progress. The effort on the cleric conversion tool was put on hold (explanation in the other thread on this topic ... see link above).

Soon, very soon. This will be a thing.

Thank you Oda! I look forward to this tool some time in the future! It's always good to see you reply, it gives explanations to questions I have.

THANK YOU FOR YOURS!