Kat was always, and will always be forevermore, the model "Average Joanne". Nothing more, nothing less. It didn't sadden her anymore- She didn't envy others anymore, she didn't wish nightly for better looks or perhaps a sharper brain. She just was.

With flaxen-gold hair, dark eyes, and a quick smile, Kat may seem very happy the way she is, but she's not. Well, not really. She's satisfied- but not content.

Katrynna stood there, in line with the other soldiers, in line on each side of the deep purple carpet that stretched for many feet across the courtyard- The princess couldn't possibly dirty her delicate silk slippers or the finely sewn hem of her bright blue dress. Kat was the only woman soldier- on the verge of being omitted from the army because of her sex. Her fighting skills couldn't properly make up for her... "condition" as the commanders had said it.

Suddenly, Kat snapped back to attention. The princess was in front of her, her face turned toward the throne room, where she was supposed to be heading, but her head was turned to Kat, staring straight at her. The princess used to be her best friend. Daughter of the king, and daughter of the wealthiest merchants around, it brought good words to both their families (Kat's parents: "Oh, yes, we're very well acquainted with the king, my daughter and the princess are just such good friends." Princess Lydia's parents: "Of, course, we have very good relations with our people, my daughter is always playing with the daughter of a merchant."), though they used to enjoy each other's companies. Until they had a fight, and a fallout. After that, Kat never spoke to her again. But that was a long time ago, before Katrynna had realized she had no head for money and merchandise, though she did have the strength of a well-trained man, and brain enough only for tactics and strategical operations. Now, Kat was a soldier... For now. She suspected today or tomorrow would be her last days before she was kicked out.

The princess grimaced, and motioned over the subcommander (The head commander being at a war meeting, of course), whispering something in his ear while staring at Kat with the look of someone who has spotted a cockroach.
"What is she doing here, Trevalin?" She hissed.
"She's a soldier, your majesty." Fearing the princess's deadly temper, he quickly added, "I can kick her out of my troops i-if you wish... S-she's not m-my best soldier, a-anyways..."
"Yes, do that. Now. I will stand here until you do." She glared at him, then shifted her gaze back to the flustered soldier.

Sighing heavily, Kat stood at attention, her neck and cheeks reddening with surprise and anger. And hatred. Subcommander Trevalin came and stood in front of Kat. He had been the one to induct her into the army, the one who vouched for her the entire year. Now he had to take it all away. "I'm sorry.." He whispered to her, barely audible.

Having no other words, Subcommander Trevalin reached out, and took Kat's Legion Sword from its scabbard. "Katrynna Veirnay Fembay Ellia," he started, paused, then continued again, "you are no longer a soldier under the command of the Dhona Legion. Please go to the armory, return your armor and pack up your equipment. You are to leave today.

Ashamed, Kat turned and stormed away, making sure to send Lydia a scathing glance. 'I'll be back. I'll train so much, I'll be better than ten lame-brained male soldier put together,' she thought to herself.

Plain Joanne Kat was going to be the best soldier on the Legion. And you'd better believe it. 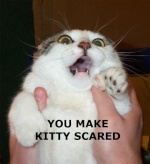