So.. from watching several events recently, it seems to me that the majority of the playerbase prefers plots that allow them to utterly dominate everything in there path, rather than make them react, think outside the box, and possibly even realize they cannot yet defeat said foe. That told stories are preferred to events entirely based on what the players decide to do. I would greatly appreciate input from the players, to what you do and do not like from the DMs.. Whether you prefer challenges and puzzles, or if you prefer simple 'click and kill' quests with a storyline. Nothing is wrong with either, everyone has their own preferences, and I think both have their own niche. However, I have noted several OOC complaints once certain characters aren't handed an easy win. Please any input is most welcome to what the majority prefer.

my input would be that what i like in an event isn't so much as a brain teaser but still a challenge in its own different way. i also think that in an event either all, half, or most of the players should possibly have something useful to contribute to the certain event that the others cant really help with and unless its an event that is just for one person and then someone is pointed out as a certain somebody everyone is after, i think it should be like that with more than just one of the players unless the number is really low. like i said though, personalized events i can see how only one player would be pointed out but in a main event is where I'd like everyone, or at least half, to feel special in. this is just my opinion though, not sure about everybody else...

Basic spawns like the shadow guards in recent campaign constantly drink healing potions I would think maybe once but nor heal maybe critcal or serious wounds. The Dragon fought today is an ancient creature and thus powerful and would logically take longer to be defeated.
Also the xp being out of whack it is nice the dms give everyone the same bonus.

I think the main gripe is when a lesser spawn like the guards or mists, if attacked by a large group, they should be easier to defeat, where as maybe one on one or two to one more difficult.


To me a good dm event is about rp and group and to recognize although a group that maybe a character or characters
have the rp based on what happened in game so should naturally initiate things and learn when to lead and when to step back and let things take their course. I have come on and maybe in a middle of a plot and although not involved in the preplot I do my best and let those whom were set the pace and adapt.

Even if your character is headstrong and want to take charge and claim everything, on an ooc side you need to be conciderate to the ones whom the current plot is about. You can be flexible in game without compromising too much.

Why do I suddenly have the feeling of a metaphorical hand on my cheek? ;-) *pokes Charia*

The shadow guard only have 5 heal potions in my defense and all range in level from 10-40, And most of you chug heal potions like there candy so I thought it only fair to give them a way to heal themselves as well. Just FYI. So you only have to worry about it 5 times theyll die eventually 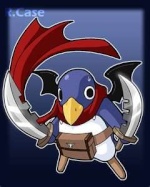 Neither one of my characters chugs potions and really I maybe saw only one other charcter do so. Most people I have seen in battles may drink one potion or use a bandage if need be bit for the most part they fight on even with thier injuries. Aside from that though if five pcs on one guard they should go down easier than less. I think its not just the guards but any nasty spawn.

with the potion topic, i never even heal during a fight unless i have a spell which i usually don't since I'm rogues, i have only seen one player in the whole module even use any heal potions besides npc's and im pretty sure no one wants me to post names in public but if any dms want to know who this person is, just send a pm to me and ill tell ya

Well, while floating high above, I've seen SEVERAL people use heal potions.. but thats understandable, its what they're for afterall, but I think perhaps they're a bit too easy to obtain.. but if you have it, why not use it? Just consider, if a PC can easily get them, why should an NPC not be able to?