Pieces of a (half)man: A Stranger Returns

Pieces of a (half)man: A Stranger Returns

The halfling sat staring into his mug, taking in the sounds around him. The Justice Inn was rowdy as always, and though he didn't know why the man found it oddly comforting. For a moment he took in his own reflection in the ale, his usual ruddy complexion surrounded by a veritable nest of hair. His beard had grown in full (as full as it gets for a half-man), and his long, nappy hair had to be pulled back and tied so as not to get in the way. He recognized his own face as much as he recognized the very beer hall he'd stumbled into; with a wisp of familiarity and a heap of fog.

He upturned his head as two of the patrons began taking swings at one another, noting a few others resting their hands conveniently upon their weapons. The halfling too, had let his palm drift to the hilt of a dagger concealed about his waist, but found his own temperament to remain rather calm amidst the growing chaos. It was almost as though he was unaccustomed to his own reflexes. That being said, he did his best to keep from making eye contact with any potential ruffians as he continued enjoying his drink.

The half-man, who called himself Fen (for that was where he'd woken up some days ago with sizable holes in his memory), was just reconsidering his last drink when he made the eyes with a bar hand standing by the counter across the room. For an instant it seemed the barhand was oblivious to the action taking place in his place of employ; he was transfixed on the face of Fen. As they made eye contact, Fen furrowed his brows in confusion and the barhand turned, whispering to a cohort before disappearing in a back room. Duly concerned, Fen slammed back the rest of his ale and left a generous sum on the table as he rose and made for the back door.

Fen was hardly three steps from the door when two hooded figures appeared from an alley, one gesturing directly at the halfling. He was off and running in no time, yet the two human brigands had the advantage in stride, and Fen had to make for the nearest corner and shift direction to have any hope of losing them. The hooded pursuers stayed on Fen for what seemed like half an hour, tailing him around every bend, never far enough for Fen to duck into a nearby crate or barrel and hide. Fen, having no recollection of the city's layout, felt as though he was running in circles. Eventually he came to an opening in the avenue and was staring out across an open quad with his pursuers breathing down his neck.

Knowing they would surely take him out in the open, Fen saw his only option in the form of a large well. It was there he'd either make his last stand, or finally outrun the fiends who chased him. Diving for the opening, Fen managed to deftly make the leap and snag hold of the sides of a ladder, sliding down into the sewer and landing in a small puddle. With a reverse somersault he rolled to dry ground, adroitly drawing the pointed dagger from his belt and waiting.

It had seemed as though the hooded thugs were right behind Fen, but it was almost a minute before he'd heard them reach the top of the well. The moonlight shining through the opening was cut off as one of them presumably climbed onto the ladder, but a second later Fen heard the two speaking in tones of mirth.

"He figured to hide from us down there? Either he's dumber than we expected or he's got no idea what he's doing. Dead man either way," Said a gruff voice.
"The blasted barkeep probably sent us on a goose chase. I don't think that was our man at all. Hard to tell from a painting anyway." Replied the other.
"Aye, paintings don't age. He looked like an old geezer."
"He didn't move like no geezer though."
"No, he didn't now did he? We'll find the basta...." Said the gruff man, the last words Fen heard.

He waited there for hours, eventually sitting up against a cold, wet stone and closing his eyes to relax. From time to time he stirred at a sound, but it was only the strange dripping, plunking, and clunking of the city's underbelly. As night became day, Fen slowly creeped up the ladder to the surface. There was no sign of the brigands, and waiting until the only passerby was looking away, Fen softly hopped up and out of the sewer mouth. Pulling up his cowl and keeping his cloak wrapped tightly about him, "Fen" returned to the boarding house where he'd stashed his belongings; no questions yet answered but a slew of new ones raised. 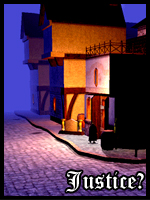