Each of the systems used in Argentum Regio will be described here. Questions regarding the given system should be asked under the thread dedicated to the system if it exists here. If the thread is not yet part of the forum for a given system, then post a reply to this message on whatever system you have questions on - and we'll soon start a thread just for that topic.

Good to see you got around to posting some basic explanations and Tutorials. I always had the feeling that such a source of information for the countless systems on the Server was missing around here in addition to the ingame explanations, who seemed to be missing lots of information on various systems last time I checked. I'm looking forward to seeing this subforum being filled.

The other day another PC said that they were under a curse,
apparently nothing they did could remove it, and as far as I know the priests in
town don't offer this service.

So what are curses, and how does one remove them?

As far as I know, NWN wise, getting cursed requires you've gotten 'Bestow Curse' cast on you by an angry finger-pointer. Usually, a high enough leveled cleric PC can remove it for you--IG(In game) wise, I think your character loses a level, or your skills are lowered. It's not too great. :/

I have experienced curse too. A nasty -4 to all stats. 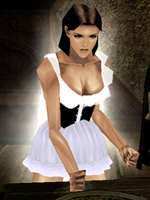 We suspect this is something to do with the deity favor system and are looking into it. Thanks for the heads-up on this one.

Yeah I had trouble with curses myself. I couldn't raise my deity favor for Darklord because I couldn't pray at the altar. If I'm right, you can buy a Remove Curse scroll from the DMFI Start supply shop, but you need a capable spellcaster to use it.

I believe I found a bug in the Lycan system. Krossy was in a scuffle with one and got infected, so as soon as I saw the lycan bar I knew he was feeling the change. So I had Krossy take a measure to cure the infection by eating a leaf of Belladonna, since going by the monster manual this should provide a fortitude save to cure the infection at DC 20, which isn't a big risk when you have around 17 fortitude. Now I'm not sure if that's how it works on the server, but I looked all around the forum and couldn't find anything on the Lycan system.

Anyway, three things happened after eating the Belladonna. One, there seemed to be some kind of error message saying that the script couldn't find my level, so it assumed I was first level. Two, I was damaged to -5 hp and bleeding, and I didn't see any saving throws or ability checks made. And three, I died, respawned with a soul rune, and was fine for about two minutes before I was reduced to -5 HP once again in the middle of the street. I thought that was odd, but the Lycan bar went away so I thought I was cured since coming back from the dead tends to cure what ails you.

After respawning, I had him eat another leaf of Belladonna to test if he really was cured, since I know normal characters just get protected by using it and not hurt, and the exact same things happened. Is this what the script is supposed to do? Can I get more information of the system? I'd like to be able to cure Kross from his lycanthropy.

1. Where did you get your Belladonna?

I got it from one of the boxes in one of the docks areas, the ones that have random treasure scripts behind the Tradehaus buildings. I couldn't tell you the exact chest or which dock it was, but it seemed to be the same Belladonna that was in the standard palette, maybe modified a little.

Picked Belladonna leaves are standard item however they are marked with the date they are picked. Thus you need one reasonably fresh.
(Best to try after update – just found out that the date stamp on the items is old version thus not including the year value – Thanks fixed that in the script)

Basically what has happened is the system is treating it like an old Belladonna leaf that’s not fresh enough to cure you. So instead you got poisoned, now Belladonna poisoning effects lycanthropic creatures by dropping their lycon power bar by a fair bit. As a new lycanthrope your power wasn’t strong enough to overcome the poisoning so its gone too low...
Kill Deer if you are a werewolf to get this back, Drink milk for cats and honeycomb for bears, Blood (attack NPCs in Game Face mode) for vampires... If you’re another animal ... EEEK you’ve got a problem.

There are three alternative methods of Curing:
1. Fresh Belladonna (Pick it, there are plants around), fort save, etc

- Before First Change.
2. DM OOC Method – There is a DM Big Red Button for Removing lycanthropic Curses (This is RISKY) - Anytime
3. Ritual Cleric Method - Anytime but gets harder as lycon ages
_________________
Until next we meet

I'm kidding! Thanks Eri! You answered 110% of my questions, which means you answered questions I didn't think to ask yet.

Which means you're in my head...

Well, could be worse. Thanks again hun!