I was thinking of making a pure crafter, as in this character would be a master crafter (hopefully) but would be useless in a fight. Enchanting and smithing seem useful, and looking back through the forums has created pretty amazing items, but most adventuring builds don't seem to be able to reach such levels.

I was thinking of making a character who would be able to reach pretty high standards of crafting, but I'm not sure on all the mechanics of crafting.

But as for feats (other than skill specializations in crafting), I'm not sure.

Intelligence seems to be the most important stat, but what about Wisdom?

Which class? I was thinking bard, or another caster class.


[You must be registered and logged in to see this link.]

Race can add to crafting as well. I think elves, half elf and dwarves.

I could always help you with a role play oriented build, but one that is still mechanically stable. 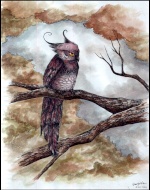 But I don't recommend them if you want to be a super duper crafter. Here are a few considerations.

High Intelligence Early: Any moderately skills based character will do for your crafting character. Remember you get your intelligence modifier X4 on character creation, so having 14 or 16 intelligence at 1st level makes a big difference.

Choosing a class:
Rangers, Druids, Bards, Monks and Barbarians get identical skill points. 4 points +1 per level, though Bards and Rangers get the most relevant class skills.

Avoid being a Cleric, Sorcerer, Wizard, Paladin or Fighter at 1st level, but consider a few of these spellcaster levels to be able to augment your abilities with spells. They all get 2 points +1 per intelligence bonus per level

Only rogues get more skill points than anyone else, with 8 +INT. At 1st level, this would be a whopping 44 skill points for a rogue with 16 intelligence. Much more than you will need.

Humans get 4 more skill points at 1st level and an extra point every level thereafter. They also get an additional feat at 1st level, so you could take skill focus in 2 skills, like craft armor and craft weapon.
Note that it takes a combined total of 20 in these two skills to get your crafter's licence after you graduate from the college.

As these are class skills for all classes, progression is the same. Craft Weapon and Craft Armor are also intelligence based, and depending how you are evaluated by the registrar, your intelligence modifier may be the difference between being able to fabricate items - which requires a license - or not.

What can you equip?
Next consideration should be what you want to be able to do with your crafted items. Your size will be important if you wish to customize large weapons and shields and you may want to include a class that gets armor and shield feats for free. Martial weapons feat will be essential to equip pickaxes and handaxes (for all but monk characters) If you want to customize exotic weapons, you will need to include that feat as well.

If you want to test powerful traps, you may want some rogue, ranger or assassin levels.

I would recommend a Neutral Ranger who worships Gressels to start. Gressels domains are both knowledge and earth and he is a patron god of crafters so it seems a good fit.

I am new to this system so I am not sure what individual bonuses elves and dwarves get over humans, but the skill advantage for humans is obvious. The story I have seen so far suggests that the elves made all the crafting stations in the college so they may be favored by the rules. When in doubt, roleplay the character and let him be what he will be. My crafter is a gnome.

Ranger has many advantages. Martial weapons, and Medium armor, plus animal empathy and set traps as a class skill.
High level rangers also have a useful selection of spells that they could use to make wands with the craft wand feat. These would be usable by Rangers, Paladins and Clerics, including polymorph self wands, which could prove to be a popular item. A Wizard could make polymorph wands usable by bards, sorcerers and wizards, so if you could craft both kinds, you could bill yourself as the crafter who can make anyone fly (except pure class monks of course.)

Second class could be wizard, then, and either an elf or human could progress as desired in either class without an experience penalty.

If it were me, I would start as Ranger then immediately change to Wizard to get handy spells to help with crafting. Then at 8th level (Ranger 1/Wizard 7) you could have a wizard polymorph spell, allowing you to fly when needed, or carry huge loads of ore in Umberhulk form.
You could take the craft wand with your free wizard feat at wizard level 5.

Then go all ranger to 15th and between the two classes you will have a fine selection of spells from 1-4th level for wand making at 22nd level. Seems like a long term goal but the versatility you have at 8th level will allow you to excel as a crafter before that.

Keep in mind that the skill focus feats are not necessary, though they will allow you to get your license to craft earlier.
The two classes together give you the following as class skills:

Starting with 16 intelligence and increasing to 18 by level 8, you can eventually have maximum skill points in all of these skills, depending on class choices later.
Note here that disable trap is not a class skill, but recovering a trap you have tested yourself will yield an automatic success. You will need to assign at least one point to disable traps if you want to recover traps. Each point will cost two skill points as any non-class skill.

Abilities:
Remember that different skills will require different abilities, so do not have penalties in any ability score.
I recommend 16 INT and 14 Wisdom to start, with all other abilities average. Remember you will have spells to make you above average in all abilities, and some activities can be done in other forms.

Alignment:
I recommend true neutral. You will have no qualms about selling to customers of any ethos or doing the occasional less than legal act to acquire materials when necessary.

Feats:
Save space for Exotic Weapons, Heavy Armor, Craft Wand (can be bonus wizard feat), and skill focuses if you think you need them. Note that as a wizard, you get the scribe scroll feat for free at 1st level. This would also allow you to scribe your ranger spells.

I'm sure more experienced players will have some further insights, but I think this character would make a very capable crafter here from what I have seen so far.

That I forgot that.
WELCOME TO THE SERVER!

I have a pure cleric who is a half elf with craft wand feat.

Your suggestions sound good however there are some tweaks which need to be done with the current system of which the admins are aware.

Welcome to the server!

Similar topics
» RESOLVED - HARDWARE issue on my build system.
» Too much xp bug?
» How to build a Human Cleric?
» Characters With Class - Build /and/ RP Tips
» Good places for lower levels to build up.